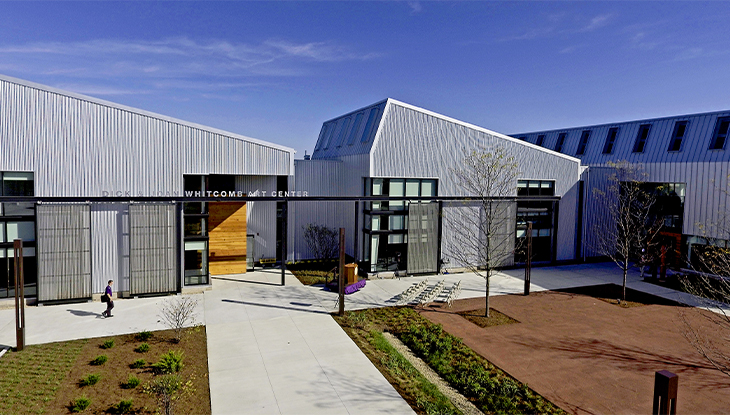 This striking design by P.J. Hoerr, Inc. includes three main structures connected by link buildings. Designing a college art building opens the door for a little creativity and imagination, which can be found in every aspect of this design. The LEED Gold qualified building provides more than 29,000 sq.ft. of academic and support space on two floors. BattenLok HS was used on the roof and three panels make up the walls, including BattenLok HS, PBC and PBU, all of which feature a galvalume finish. The open stairs and double height spaces foster collaboration and the exchange of ideas.

"Typically, a metal building is one big box, the unique shape of the building created some interesting challenges."

THE ART OF THE METAL BUILDING SYSTEM Knox College, in Galesburg, IL, was in need of more space, and better space, for arts education. Fine arts had been housed with music and theater in a facility built in the early 60’s. The college had ambitions to build a dedicated, state-of-the-art facility with studios for painting, printmaking, design, sculpture, ceramics, drawing and digital art, metalworking and woodworking shops, classrooms, faculty offices, dedicated open studio space for faculty and seniors working on capstone projects, and space to display student work.

If the goal was large, the strictness of the budget was, in a sense, even more ambitious. To meet the college’s construction budget, Star Builder P.J. Hoerr, Inc. knew just what was needed. As Kirk Anderson, vice president of P.J. Hoerr, put it, “We could only do it with a metal building system.”

The college president wanted the building to have large windows, so passersby could see what the students were working on. She also suggested that the look of the building should be able to “blend into the urban fabric” of the industrial area adjacent to the east side of the campus where the new building was to be situated. In response, Lake/Flato Architects created a unique and striking design with a sawtooth roofline and exciting interior spaces that encourage creativity.

The new Whitcomb Arts Building, a 30,000 sq. ft. facility, is actually five metal buildings connected together, custom made by Star Building Systems. About 70% of its footprint is divided by mezzanines into two floors. There are major double-height areas, to provide pinup space for large work, a ‘critique hall.’ There is a lecture hall that accommodates large gatherings and receptions for student work. Facilities for both cutting edge and historical art media include computer labs and film development rooms.

From the builder’s standpoint, it was a very unusual project. “Typically, a metal building is one big box,” explains Anderson. “The unique shape of the building, with parts of the roof having a 24:12 pitch, created some interesting challenges.”

The project was built with a target of LEED gold certification (a final decision on its actual LEED status is still forthcoming), which led to a number of innovative design choices. There had been an older building on the site that was the property of a lumber yard. It was demolished for the new construction, but a significant quantity of wood was reclaimed from that building and re-used in the Whitcomb Arts Building. Classroom spaces, for example, are divided by barn-door style doors made of that reclaimed wood. Other sustainable aspects include extensive use of daylighting, and storm water retention system of bio-swales whose plantings help process and breakdown pollutants in the run-off.

Perhaps most unusual for a metal building is the massive amount of glass. Approximately 40% of the exterior is glass, bringing in a good deal of natural light. The unusually high-pitched, asymmetrical roofs also have skylights. To control sunlight on the west side of the building, the windows can be covered by large, barn-door-mounted perforated metal panels.

The exterior evokes a kind of idealized industrial complex. The rhythmic saw-tooth roofline makes the entire building looking like a single, vast, gleaming machine. The metal standing-seam roof, made with MBCI galvalume-coated roof panels, is echoed on about 20% of the exterior walls, as well, emphasizing industrial roots. The clusters of rectangular glass, and accents of reclaimed brick and reclaimed wood, take it beyond the utilitarian reference, an evolution into something more sophisticated and complex.

The Whitcomb Arts Building project began in November, 2015, and was substantially completed by October 2016 at a cost of $7 million. Star Building Systems made the buildings, and P.J. Hoerr was general contractor, self-performing substantial amounts of the work including the concrete, steel erection, metal cladding, and finish carpentry. P.J. Hoerr, Inc. was named Star Building Systems’ Master Builder of the Year for 2016 for this project. The building was fully opened for student use in January 2017.